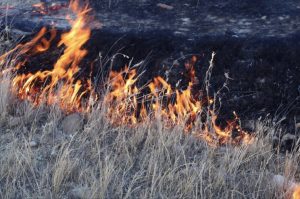 Update at 4:15 p.m.: Cal Fire spokesperson Emily Kilgore reports that the lightning strike fire in the area of Mountain Ranch Road and Rocky Road in Calaveras County, titled the “1-1 Fire,” has been contained at one acre.

Update at 11:55am: Air attack has located a new fire in the area of Mountain Ranch Road and Rocky Road. It is approximately 1/2 acre. An engine and crew are responding to the scene.

Update at 11:25am: While there were four reports of vegetation fires, CAL Fire reports that only three were located. The fires in Copperopolis and in the North Fork of the Mokelumne River drainage have been contained. The third incident, near the vicinity of Swiss Ranch Road, is being extinguished by arriving personnel.

Update at 10:47am: The CAL Fire Tuolumne-Calaveras Unit has initiated a lightning response plan for its northern region so that a reduced number of resources will go to each of the small lightning caused vegetation fires. It frees up engines and personnel to respond to other incidents. This way, instead of having several engines respond to a small tree fire, there will likely only be a single engine. If the initial responders see a need for more resources, additional engines will be dispatched.

Also, firefighters are now staffing the Blue Mountain Lookout in Calaveras County, and air attack continues to patrol the unit looking for new lightning caused incidents. As reported below, four small fires have been located to this point.

Update at 10:28am: A fourth fire has now been spotted in the North Fork of the Mokelumne River drainage, south of Highway 26, near West Point.

Original story posted at 10:18am: Mountain Ranch, CA — There are multiple small fires that CAL Fire is responding to after lightning and isolated rain showers passed through parts of the Mother Lode.

We reported earlier that crews are on the scene of a tree fire in the Christian Gulch area of Copperopolis. There are now similar type fires reported along Swiss Ranch Road near Mountain Ranch and between Highway 26 and Highway 88 near West Point.

CAL Fire reports that air attack will be up this morning patrolling for any additional fires that may emerge. None of the fires are currently threatening any homes or structures.