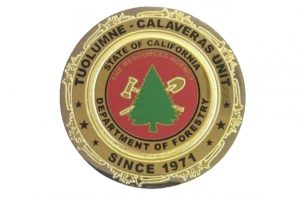 Update at 10:06am: CAL Fire confirms that it is a lightning strike that hit a Grey Pine and caused a 10 ft. x 10 ft. fire in the Christian Gulch area near Copperopolis. It was spotted by the Fowler Peak Lookout and crews quickly arrived on scene to control it.

Original story posted at 9:47am: Copperopolis, CA — Firefighters are on the scene of a tree that caught on fire in the Christian Gulch area near Copperopolis.

It is reportedly in the vicinity of Morgan Road and Appaloosa Road. The CAL Fire Tuolumne-Calaveras Unit has heard reports of multiple lightning strikes in the region over the past couple of hours, and some isolated rain showers. It is under investigation whether lightning was the cause of the Copperopolis tree fire. Officials do not anticipate the fire will expand to much surrounding vegetation, and it should be controlled shortly.