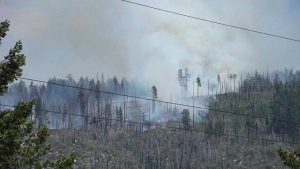 The largest is the Cottonwood Fire, which is 88 acres and located 2.5 miles east of the Mather Ranger Station in Tuolumne County. Sixty-five firefighters are on scene, as well as two helicopters, and a pair of hot shot crews from the Stanislaus and Sierra National Forests. It should be fully controlled by late Saturday.

The Mono Fire is approximately six acres and burning within the Illilouette Basin and Yosemite’s wilderness in Mariposa County. Fire crews are monitoring it for potential spread and allowing it to burn out naturally.

The fire’s started Monday afternoon during a thunderstorm. They are not affecting any major roads.