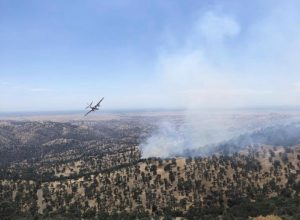 Update at 6:10am: CAL Fire reports that the Valley Fire is now 80-percent contained and holding at 155 acres. Crews will remain on scene throughout today.

CAL Fire reports that the “Valley Fire” ignited this afternoon in the area of Guadalupe Mountain Road and the 3000 block of Old Highway. It is in the Catheys Valley community east of the town of Mariposa. The fire is 155 acres and 50-percent contained. Initially there was one structure considered threatened, but it is no longer in danger. Crews will remain on scene through the evening hours.