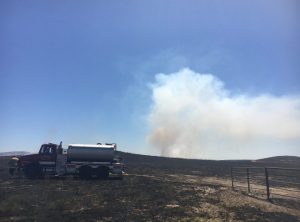 They add that mop-up operations will continue for a few more hours, so expect heavy equipment and related activity in the Highway 4 Milton Road area.

Update at 4pm: The Milton Fire is now 75 percent contained at 202 acres, according to CAL Fire

While there is no word on the percentage of containment, officials note that resources are being released and air units were called off in the noon hour.

Update at 12:30pm: Firefighters stopped the forward progress of a blaze west of Copperopolis, dubbed the Milton Fire.

According to CAL Fire officials, air resources have been released and ground resources working on the containment lines are getting an accurate acreage assessment. The incident is currently estimated to be about 200 acres.

Update at 11:51am: CAL Fire reports that progress is being made extinguishing a vegetation fire near Highway 4 and Milton Road. The Fire is up to about 100 acres in size. The Columbia Air Attack remains assigned to the incident, but the outside aircraft has now been released back to base. Firefighters will remain on scene extinguishing the fire throughout the afternoon.

Update at 11:35am: A vegetation fire in the area of Highway 4 and Milton Road, west of Copperopolis is now 50 acres. CAL Fire reports that all air resources from Columbia, including three planes and a helicopter, are assigned to the incident. In addition, two additional air tankers, and another helicopter, have been ordered. The fire is being fought from both the air and ground.

Original story posted at 11:10am: Copperopolis, CA — There is a vegetation fire that has ignited in the area of Highway 4 and Milton Road, west of Copperopolis.

CAL Fire reports that the blaze is around 15-20 acres and moving at a moderate rate of spread. Air and ground resources are responding to the scene. Be prepared for activity in the area. We’ll pass along more information when it becomes available.