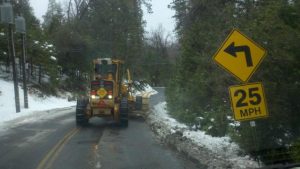 Travel remains hazardous, forcing Forest Supervisor Jason Kuiken to extend a road closure order through July 31th or until conditions allow the roads to reopen. Cooler temperatures have delayed the spring melt says Mi-Wok and Summit District Ranger Sarah LaPlante, who adds, “It’s been a long time since our roads have remained impassible due to snow this late. Our maintenance teams are finding conditions improving, but there was a lot of snow up there. We ask visitors to be patient and know we are opening roads and facilities as quickly as we can.”

Forest officials note that allowing vehicles on roadways would also damage the infrastructure and paved surfaces, which could result in increased sedimentation in Eagle and Herring Creeks and other area drainages.