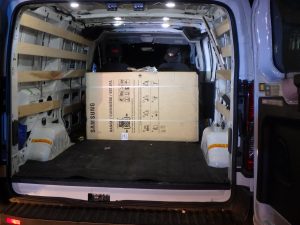 Electric stove found in back of van

Sonora, CA – Noticing a van behind a Sonora big box store early Monday morning when it was closed caused a passerby to become suspicious and call police.

The call came in around 3:30 a.m. with the tipster reported seeing items being loaded into a white van from a storage container behind the Lowe’s store located on Old Wards Ferry Road. When an officer arrived on scene the van was gone, so he canvased the area and spotted the van nearby at Walmart’s back parking lot.

Inside the van were two men, 33-year-old Christopher L. Anstine of Empire and 32-year-old Joseph D. Jones of Waterford along with a woman, 32-year-old Sara K. Sanchez-Morales of Ceres. A search of the vehicle turned up a stolen a Samsung electric stove still in the box, numerous burglary tools, drug paraphernalia, and a small amount of heroin. Police found that the lock on the storage shed had been cut.

The trio was arrested for burglary, conspiracy to commit burglary, possession of stolen merchandise, a controlled substance and drug paraphernalia. Anstine and Jones bails were set at $15,000 each with a $10,000 bond for Sanchez-Morales