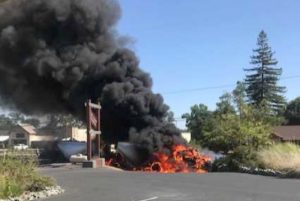 Update at 5:45 p.m.: The CHP reports that that the wreckage has been removed and traffic is moving freely once again.

Update at 5:15 p.m.: The CHP reports the fire has been contained to just the semi and the flames have been knocked down after a crash on Highway 49 in Angels Camp near North Baker Street. One person has been air lifted from the scene and a second individual that was pinned in a vehicle has been freed and will also be flown from the scene. Major injuries are reported by the CHP. The truck is blocking the highway as officers direct traffic.

Original post at 4:55 p.m.: Angels Camp, CA — Emergency responders are on the scene of a crash involving a semi that is fully engulfed in flames on Highway 49 in front of the Angels Food Market in Angels Camp.

The CHP reports that the truck is blocking both lanes of the highway and is threatening some power lines, but is not nearby vegetation. Air ambulances have been called to the scene as the CHP reports major injuries in the crash involving two individuals, one that was pinned in a vehicle. Officers are directing traffic.