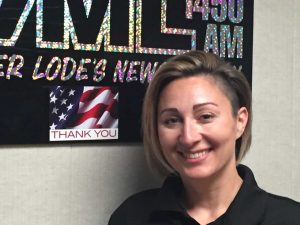 Country music recording artist Jennifer Grant, who was raised in Sonora, will perform this evening at the Mother Lode Fair.

Grant was Thursday’s KVML “Newsmaker of the Day”.

Long time residents may recall Grant singing at various events around the Mother Lode, such as the Mother Lode Round-Up Rodeo, as early as 1990 when she was in the fourth grade. Over a decade later, Grant was crowned the winner of the Mother Lode Idol contest. Grant credits the win as taking her desire to sing and perform, up to the next level.

Music was first introduced into her life by her father, David, who worked as a local law enforcement officer. With influences like George Strait, Whitney Houston, Fleetwood Mac, Terri Clark, Garth Brooks, The Eagles, Boston, Martina McBride and Sheena Easton – – Grant has now performed at MLB games, NHRA races, NBA games, Rodeos, National Police Week in Washington D.C., and even before a couple of Presidents.

Grant’s first single “Feels Like Cheatin’” was released on iTunes and local country radio station KKBN was the first radio station in the USA to play the song.

“My phone rang off the hook” said Grant. “Friends and family from the Mother Lode were telling me that KKBN was playing my single. It was so exciting and really special that my hometown radio station was playing my song”.

Grant has just released her second single. It is called “Done”. She recorded both songs in Nashville, working with a team of songwriters and musicians that includes the lead guitarist for Pam Tillis and Clint Black. Grant currently has an EP available and is in the patient process of recording a full length album.

Meanwhile, Grant looks forward to performing before many old and new friends tonight at 7 PM in the Grandstand section at the Mother Lode Fair. She will be available for pictures and autographs following the show.

Tonight’s concert, that also features Bonnie Bishop and the Paul Thorn Band, is included with the cost of Fair admission.