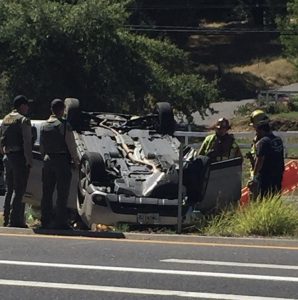 Sonora, CA — There have been two notable accidents this afternoon on Highway 108 in Tuolumne County.

The CHP reports that the first incident happened at 3:25pm near the intersection of North Sunshine Road. Two vehicles were involved in the crash and one of which rolled over. No names have been released, but one person suffered a major leg injury and a second person reported minor injuries. The vehicles are off the highway and traffic is moving freely in the area.

At 4:15pm there was a crash reported on Highway 108 near Beardsley Reservoir Road. An ambulance is responding to the scene, and a vehicle has reportedly gone down a hill. Be prepared for activity in the area.