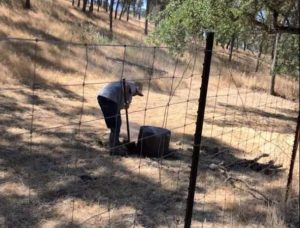 Sonora, CA — It was a busy weekend when it comes to fire activity in the Mother Lode, with multiple incidents igniting across the region.

The largest has been the Merced Fire that ignited Saturday afternoon east of Snelling near Merced Falls Road. As of this morning, CAL Fire reports that it is 210 acres and 70-percent contained.

The second most notable was the Floto Fire that burned 30 acres on Saturday in the area of Highway 132 and J-59 near La Grange. It ignited around 7pm. An hour later was the Cove Fire that burned two acres near Wrinkle Cove at New Hogan Lake. Earlier Saturday afternoon there was a ½ acre fire on Highway 4 near Horseshoe Road in Copperopolis and a two acre fire near Hawver Road and Sesame Street in San Andreas.

Sunday morning there was a small illegal debris burn near Highway 26 in Valley Springs, and during the one o’clock hour there was a 1/4 acre fire that burned across three properties in Rancho Calaveras. That incident was determined to have been caused by someone mowing dry grass with a tractor. Citations were issued related to the illegal debris burn and mowing dry grass.