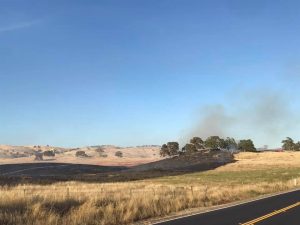 Update at 7:48pm: CAL Fire spokesperson Emily Kilgore reports that the Floto Fire has been officially contained at 30 acres.

Update at 7:35pm: Crews are making good progress extinguishing the Floto Fire near La Grange. The most recent size update remains 20 acres, and some of the initial responders have been released or reassigned. Crews will remain on scene mopping up the incident this evening. It is unclear what ignited the fire.

Original story posted at 7:10apm: La Grange, CA — There is a new vegetation fire near the area of Highway 132 and J-59 in the La Grange area.

CAL Fire spokesperson Emily Kilgore says it is about 20 acres in size, and incoming resources are aggressively fighting it. It is being fought from the air and ground. There are no reports of any road closures, but you will want to avoid the area. It is being referred to as the Floto Fire.