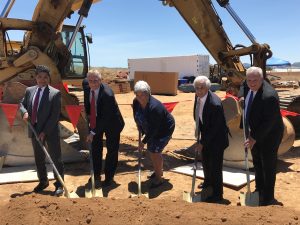 Sonora, CA — While construction began several months ago, a ceremonial groundbreaking was held this afternoon for the $66.5-million Tuolumne County Courthouse at the law and justice center site off Old Wards Ferry Road.

Speakers at the 12:30pm ceremony at the site were Presiding Judge Donald Segerstrom, Supervisor Sherri Brennan, Chief Officer of the state’s Judicial Council John Wordlaw and CEO of the Superior Court of Tuolumne County Hector Gonzalez.

It was noted that the initial plan was to have the groundbreaking in May, but heavy rainfall forced a postponement.

The speakers stated that the idea for the new facility gained momentum around 2004 after the county conducted a “space needs study,” and it inspired the idea of a Law and Justice Center campus. In 2009 the county purchased the former Gardella Ranch off Old Wards Ferry Road, and a section was later sold to the state of California to house the courthouse aspect. Many played key parts to make the project a reality over recent years, and state lawmakers approved the final funding as part of the 2018-19 budget.

Presiding Judge Segerstrom says, “There have been a lot of ups and downs, and a lot of hard work, and I appreciate all of the work that all of the people here today have done to make this a reality. To see it actually rising up out of the ground is incredible.

The 61,000 square foot facility will be completed in March of 2021, and it is adjacent to the new county jail under construction. The courthouse will include five courtrooms, lower level parking and an in-custody holding area.

Click on the image box to see some of the photos from the event, construction progress and a video of Judge Segerstrom detailing some of the history of the project and property.