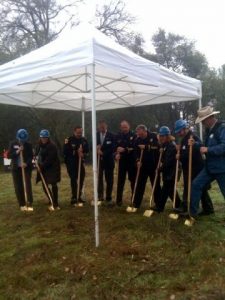 The entire project will cost around $56 million, according to the county. The state will pay $26 million and local Bond Measure J will cover the remaining $30 million. The project is expected to be completed in Spring of 2013.

Sheriff Dennis Downum has worked on the project for approximately 16 and was one of the speakers at a special ceremony held in correlation with the groundbreaking. Downum is retiring at the end of this year. Other speakers included Merita Callaway, Board of Supervisors Chairperson and Matthew Cate, Secretary for the California Department of Corrections and Rehabilitation. 25th District Assemblywoman Kristen Olsen was also on hand.

The land is located next to the Government Center in San Andreas.