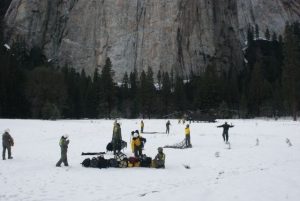 Yosemite Valley,CA– Three rock climbers were rescued yesterday afternoon from the wall of El Capitan in Yosemite National Park. According to Park Spokesperson Scott Gediman, it was a two day rescue operation.

“With the help of the Army National Guard helicopter, the CHP helicopter and our Rangers, we were able to rescue the climbers. Overall it went very well.”

Gediman says a private helicopter from Columbia also assisted in the rescue.

Climber Sarah Land, 24 from Oakhurst, sustained moderate injuries. The other two climbers, Walker Mackey, 25, and Rio Mackey, 23, both from Boulder, Colorado were not injured. All three were lowered down the wall of the 7,563 foot granite rock after spending the night on El Capitan.

Although the climbers had called Yosemite Emergency Communication for help Sunday, the Park Rangers were not able to bring in a helicopter or initiate a rescue because of the weather. The three climbers were forced to spend the night on the wall.

Completing the rescue mission on Monday was critical due to fog covering Yosemite Valley and impending snowfall at the higher elevations. Over 30 Yosemite National Park Rangers, Yosemite Search and Rescue Team Members, and others assisted in this rescue.