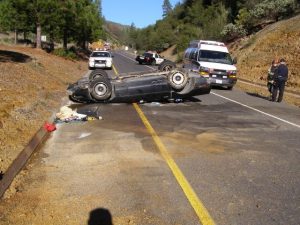 According to the Sonora Police Department, the accident occurred at around 9:30 am on Stockton Road, just east of Highway 108. Sonora Police, the CHP and medical units responded to the solo rollover accident.

The 20-year-old driver, Shawn Helfrich, told officers he was driving his 1994 Corvette on Stockton Road when he looked down at his radio. When he looked up, he saw a small animal in the roadway and swerved to avoid it. Helfrich then struck the embankment, causing the car to flip over.