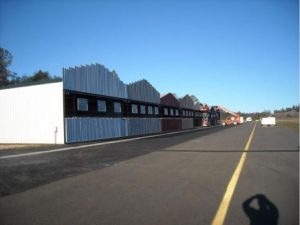 Columbia, CA– Twelve new hangars have been added to the Pine Mountain Lake Airport in Groveland.

According to Les Whittlesey, owner of Legacy Aviation Development in Irvine, the Groveland project was completed in May.

Columbia Airport is also expected to have 8 new hangers very soon. Whittlesey says Phase One will be completed by the end of the month.

“What’s unique about that project is that it’s designed in a vintage 1930’s look with the hangars along the grass runway in the Sierra foothills of Columbia airport. We’re very excited to have the opportunity to build such a unique project.”

Whittlesey says the project at Columbia Airport consists of four phases with the second and third phases beginning in late spring. When completed, the project will total 19 new hangars.