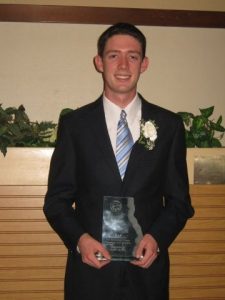 The Citizen of the Year Award was given to 18 year old Jamie Smith, who is the youngest person ever selected for this honor.  Smith’s greatest accomplishment was his project in which he planned and put on the first All American Soap Box Derby race in Tuolumne County since before WWII. Smith even raised the funds to accomplish a $25,000 road resurfacing project for the Soap Box Track.

The Entrepreneur of the Year Award was handed out to Bill and Melinda McDonald. At the ages of 23 and 24, they began the manufacturing company MMI in 1980. Since then the company has grown to 30 employees and expanded in size from a 1,000 sq. ft. building on Cuesta Ct. in Sonora to their current 23,000 sq. ft. building on North Sunshine Road.

Pete Kampa, General Manager of the Tuolumne Utilities District received the Excellence in Government Award. Under Kampa’s leadership, TUD has secured $4,562,015 in grant funds over the past four years for critical water and wastewater projects.

The evening also included the introduction of new Chamber Board of Directors. Alicia Weubker also accepted the 2011 Board Chairman seat vacated by 2010 Board Chairman Carl Tucker.