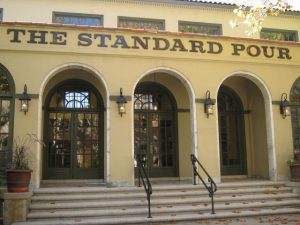 Standard, CA– A new restaurant in Standard is opening tonight at the former Lumberyard Brewery.

The new eatery called the “Standard Pour” is also owned by the proprietor of Sonora’s Diamondback Grill.  Eric Davis says he’s hired 30 employees for the new restaurant and like the Diamondback Grill, could eventually increase that number to 50.

Although the “Standard Pour” is located in a former brewery, the new restaurant will not be making its own beer. Davis said they will feature a fun and casual menu that will pair well with the 18 craft beers on tap.

“The Diamondback has been hugely successful and that’s because the community has embraced us,” said Davis. I’m just looking forward to the same kind of response in Standard, a little closer to East Sonora.”

The “Standard Pour” is located at 19040 Standard Road.