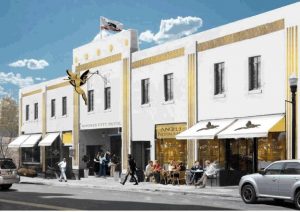 Angels Camp, CA — Developers are hoping that a hotel project will spark new life to the downtown Angels Camp economy.

The Angels City Hotel will be on Main Street near the Highway 4/49 intersection. The building housed the former “Utica House” hotel, and a portion was also recently the home to the antique shop “Orphan Annies.” The group spearheading the Angels City Hotel project is Martin Huberty, Grant Armstrong, Barden Stevenot and Ira K. Glasser.

Plans call for the historic art deco building to be restored next year. It will include 25 bedrooms, fine dining, a small market to purchase fresh goods, and a bar/lounge. The site also has an underground nightclub and multifunctional ballroom/theater.

“The art deco façade and interior will be restored,” says Glasser. “There are some magnificent historical murals that are in excellent condition that will be further restored and enhanced.”

The developers hope that the project will provide a boom to the Angels Camp economy. The group is also investigating the possibility of starting a film festival in downtown. Principal partner Martin Huberty has been a successful producer on Hollywood films like Fried Green Tomatoes and Up Close and Personal. Principal partner Grant Armstrong also has a film background, serving as an Art Director on multiple feature films.

The Angels City team hopes to begin the restoration of the hotel sometime next year. Once started, it will take an estimated 6-9 months to complete.