Dancing With The Sierra Stars 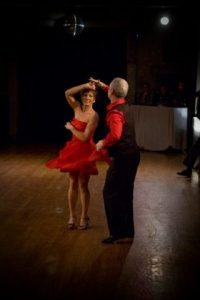 The final proceeds from “Dancing with the Sierra Stars” are still being tabulated, but the dancers themselves helped raise over $21,000. A live auction raised an additional $11,200. Jim and Jo Lucas won the Mirrored Ball Award dancing the Salsa to “Time of Your Life” from the movie “Dirty Dancing.” Jane Bottomly-Winan and Reed Severson won the “People’s Choice Award” which is given to the team that raises the most money. Other pairs competing were Allen Arnold and Cindee Walsh, Louis Clark and Dr. Mary Gauthier, Gary Kuntz and Johanna Vermeltfoort, and Bill and Marti Crane.

The event was held over the weekend at Ironstone Vineyards in Murphys. Proceeds will benefit the construction of a new Family Medical Center and Women’s Health Center in Angels Camp.