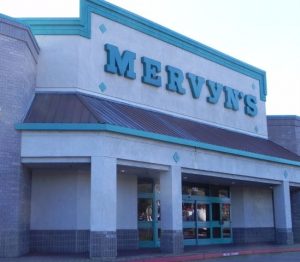 Sonora, CA — Many developments are happening on the economic front in Tuolumne County. Economic Development Authority Director Larry Cope stated to the Board of Supervisors Tuesday that the former Sonora Mervyn’s building will soon be occupied.

“I have to leave everyone guessing, but I can tell you that we have signed leases or a lease, I have to be vague,” said Cope. “We hope in the next 60 to 90 days to have some type of an announcement.”

It was one of many highlights that Cope spoke about during a 15 minute speech to the Board.

Cope noted that it is no surprise by now that Sierra Pacific Industries plans to create 130 jobs with the opening of a retooled Standard Mill next year, and as many as 650 jobs could be created with the trickle-down effect. Sandvik Thermal Process Incorporated (MRL Industries) is on track to create 76 jobs this year, with more to come in 2011-12. Kohl’s opened in the Junction Shopping Center in September and created 130 jobs. The Sonora Lowe’s Home Improvement Center should open before the end of the year and create 120 jobs. Avalon Healthcare will open its new facility in Sonora next year, taking over 35 existing county jobs and creating an additional 85 new jobs. Tractor Supply Co. opened in March in the new Standard Center, creating 20-25 jobs. Blue Mountain Minerals recently brought in nearly $1 million in new investment. Gold Rush Gardens is going through negotiations with the county and hopes to create 1,500-1,700 jobs over the next decade if plans move forward at the Jamestown Mine site. Radio Shack recently opened in Sonora. SRMC has opened a new Surgery Center and a Live Well Be Well Center. The Standard Center has broken ground on an AM/PM Station/restaurant. Briggs Hospitality has taken over as the main concessionaire at Columbia State Park, bring life back to the Columbia economy. Sierra Resource Management and California Wood Shavings have both received grants to purchase new equipment.

When it comes to food, construction on a second Sonora McDonald’s store will likely begin next year. Some current businesses are undergoing renovations/expansions, including Taco Bell, Subway, Grocery Outlet and Walmart. The Standard Pour in Standard is nearing completion and plans to open in the coming months. Schnoogs is looking at opening a location directly across the street from the Standard Pour. Artisan Pizza has opened in downtown Sonora at the former Banny’s location, and Banny’s Restaurant has moved to Mountain Springs. Two Mexican restaurants have opened recently in Sonora, La Hacienda in the Junction Shopping Center and Camachos in the Crossroads Shopping Center. Lighthouse Deli took over the former Main Street Deli location in downtown Sonora. Other recent openings include the Sonora Pub, Candy Vault, Sonora Joe’s and Stuffit Ravioli. A couple of yogurt shops are also planning to open in the downtown, according to Cope.