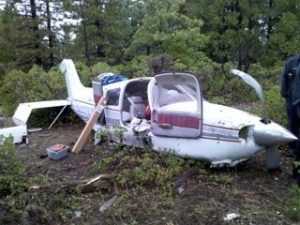 The only person in the plane, Otis Russell Johnson of Truckee, suffered minor injuries. The Tuolumne County Sheriff’s Office reports that Johnson called in the crash to emergency officials with his cellular telephone. The plane was located near the intersection of Forest Road 5N02 and 5N83 by a CHP helicopter. The airplane was severely damaged on impact, but it did not ignite. The cause of the crash is being investigated by the NTSB.

CAL Fire Engines from Twain Harte and Arnold responded, as did resources from the Tuolumne County Fire Station in Pinecrest, Ebbetts Pass Fire and the Forest Service. The crash occurred at around 2:30pm Saturday and the plane was located at 3:55PM.