Teen Saved In Near Drowning Incident In Tuolumne County 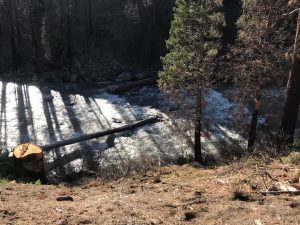 The Sheriff’s Office reports that a 15-year-old girl was fishing and camping in the Dardanelle area with family when she slipped on a rock and fell in the river. She was initially swept away but thankfully able to catch herself on a log (shown in picture), and some bystanders went down to assist, and keep her calm, until emergency responders arrived on scene. Sheriff’s officials, search and rescue, and Pinecrest Fire personnel were able to get to the girl and put a helmet and life vest on her. She was later evaluated by medics and only suffered some scrapes and bruises.

The sheriff’s office reports, “Due to the long winter we experienced and large amounts of snowfall we received, rivers are running extremely cold, high and fast. We urge everyone who recreates near bodies of water to wear life vests and to please stay out of the rivers. These conditions will most likely remain this way throughout the summer.”