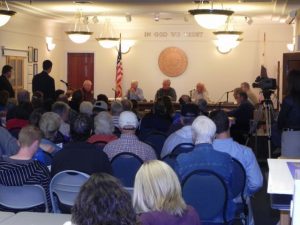 Sonora, CA — Rather than opt for a special election, the Sonora City Council has gone ahead and approved the Walmart expansion project.

The Council voted 5-0 to approve an initiative to facilitate the project, which follows a previous recommendation of the Planning Commission. Part of the decision was financially based. To call for a special election, it would have cost the city approximately $7,000. There was once again a standing room only crowd at the meeting. 12 people spoke in favor of approving the project, three raised concerns about the project in general, and no one spoke in favor of calling for a special election.

Walmart spokesperson Amelia Neufeld stated that Walmart will create 85 jobs by expanding the current store to include a grocery section.

Also at last night’s meeting, the Council put a 45 day moratorium on medicinal marijuana clinics. An applicant came to the city and proposed to open a clinic on Mono Way. The City Council has decided it wants additional time to consider how to deal with zoning and other issues related to this type of clinic.