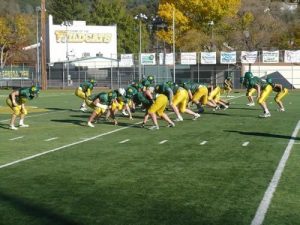 Sonora, CA — Leaders at Sonora High School have been addressing disciplinary action against one starter and at least one other team member on the Wildcats football squad.

Sources confirm to KVML News that a student athlete was arrested on assault charges following an incident October 10th at Diamond Jims in Mi Wuk Village.

When asked about the matter, the Tuolumne County Sheriff’s Office confirmed that a “bar fight” was reported around 1:30am on October 10th, and one person was arrested. The unidentified juvenile was charged with assault with a deadly weapon and using a false ID, according to Sgt. Jeff Wilson, Sheriff’s Office spokesperson. No other arrests were made.

Sources at Friday’s football game say there were vocal disputes and division among parents at Dunlavy Field about the handling of the situation.

A second incident involving a Sonora football player occurred early Saturday morning. 18-year-old Austin Thoburn, whose name was released because he is not a juvenile, was arrested following a rollover accident on Racetrack Road. The CHP reports that A 17-year-old unidentified minor suffered major injuries as a result of the crash. Thoburn has been booked into County Jail for DUI related charges.

The effects that any further disciplinary action will have on players on the Sonora football team probably won’t be known until the game versus Sierra on Friday.