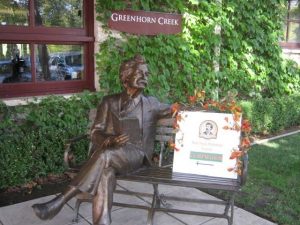 Angels Camp, CA– Famed author and humorist Mark Twain has once again made his mark on the Mother Lode with the unveiling of his new 760 page autobiography.  In celebration of this long awaited event, the first ever Mark Twain Mother Lode Festival was created.

Nearly 600 people attended this two day event, according to Festival Executive Director, Caroline Schirato. The festivities kicked off Friday at the Bret Harte Theater with the debut of Ron Power’s play “Sam and Laura” based on a true story of Samuel Clemens, also known as Mark Twain.

Saturday morning 200 people were in attendance for a symposium of Mark Twain editors and scholars at CAMPS Restaurant at Greenhorn Creek Resort. Finally, the Festival concluded with the grand finale Saturday evening with dinner, entertainment from McAvoy Lane, an internationally known Mark Twain impersonator and other speakers and presentations. The Mother Lode’s own Mark Twain impersonator, Pat Kaunert also presented and performed.

Bob Rogers, member of the Steering Committee of the Festival said, “We just are so thrilled to have the Festival here in the Mother Lode, in Angels Camp, and it brings Mark Twain’s life and his story full circle. This is probably the most significant cultural event in the Mother Lode. It’s really unparalleled.”

It was the request of Samuel Clemens to have his autobiography suppressed for 100 years. 2010 marks the 100th anniversary of Clemens’ death.