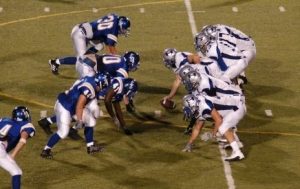 Sonora, CA– In High School football action last night it was Homecoming for Sonora but Manteca took the win at 42 to 13.

One bright spot is that Sonora’s quarterback Ryan Emerald now holds the all time record for the most touchdowns made by a quarterback, passing Zack Abernathy’s record which stood since 1995. In other games, Summerville beat Amador 28 to 21, Linden took the win over Bret Harte 39 to 20, it was Calaveras beating Argonaut 31 to 13 and finally Oakdale beat East Union 63 over 21.