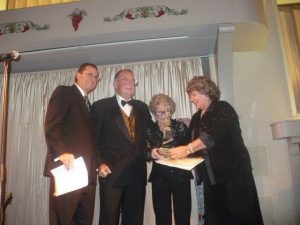 The Gala, included a silent auction, dinner, entertainment and the presentation of the Irving Symons Award.

The 2010 Irving Symons Award was presented to Chuck and Willy Evans for their outstanding, long-term service to the community.

Willy served twice as President of the Twain Harte Soroptimist, organized the historic Sonora Pass Wagon Train 4 times, chaired the Summerville High School freshman orientation for a decade and is a former Board Member of Sierra Repertory Theatre.

The silent auction brought in over $14,000. All of the money from the Gala will be assisting patients of the Sonora Regional Cancer Center with special individual needs. Funds from last year’s Gala have assisted cancer patients with personal needs such as childcare, transportation to treatment, house cleaning, household expenses and emergency medication.