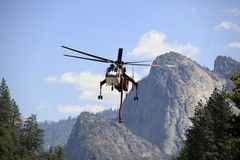 Yosemite received 3.5 inches of rain last week in Wawona and the Yosemite Valley, and over three inches of snow fell in the Tuolumne Meadows area. Fire season comes to a close every year once a storm brings in two inches or more of precipitation. Park officials say the end of this year’s fire season came earlier than many previous years.

During last week’s storms, Yosemite recorded roughly 1,200 lightning strikes, and 15 small fires. Some of the fires are still burning in the Yosemite wilderness and are not a threat to park facilities. The fires are being monitored.