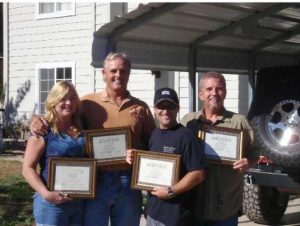 Sunday afternoon, September 5th, a fire broke out at a home on Silver Rapids in Valley Springs. Rodney and Carol Greener investigating the source of smoke in their neighborhood, arrived to find the deck and a tree on fire. Paul Lewis and Glenn Waltman came upon the scene shortly afterward as each was driving past and saw the emergency. The Good Samaritans called 911, pounded on the door to make sure there were no occupants in danger and managed to locate garden hoses to quickly extinguish the blaze.

Sgt. Busby from the Sheriff’s Office said, “It’s possible that these citizens saved this home from what could have been a very serious fire. The Sheriff’s Office commends them for their selfless concern for others.” The fire is suspected to have been caused by smoldering charcoal from an earlier barbeque.