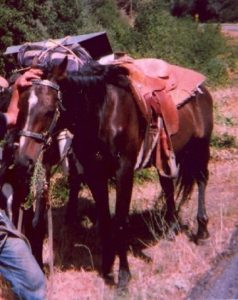 Jamestown, CA– Tuolumne County Animal Control has found Gideon, the missing horse owned by Donald Smith.  Smith, the owner of another horse, Gabriel, had collapsed near the intersection of Highway 108 and 5th Avenue September 13th.  Gabriel had to be seized to undergo a feeding/supplementation regimen prepared by the veterinarian to bring him back to normal weight.  The second horse Gideon was found this morning.

Animal Control Manager Jennifer Clarke said, “Thanks to information provided by the public, we were able to find precisely where the horse was being kept. We went early this morning, located the horse and seized him without any trouble. He is now at the veterinarian being evaluated for his body condition and treated for an abscessing saddle sore on his withers.”

Clarke said although she did not see the owner Donald Smith or communicate with him, he has been left a notice. She said after a hearing, it will be determined if criminal charges can be pursued.