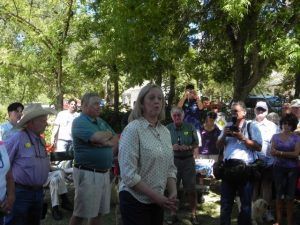 Columbia, CA – Many visitors to Columbia State Park were surprised to meet the Republican candidate for Governor. Meg Whitman has been vacationing in Tuolumne County this weekend, and she capped off the trip with a tour of Columbia State Park and a speech at the Saturday afternoon fundraising picnic for the county’s Republican Central Committee, held outside the Burns Cottage.


“I think state parks are good investments and what we are doing to the state parks in this budget crisis is wrong,” says Whitman. “We have not put our fiscal house in order, and we have to do a better job of getting out the waste and abuse, so that we can make the investment in things like state parks.”

During her speech to supporters, Whitman said creating jobs and reducing government spending will be her top priorities if she is elected Governor.