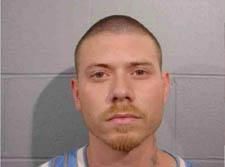 According to the Calaveras County Sheriff’s Office, two suspects entered the Pine Street home of 39 year old Victor Rivera and his 12 year old son.  Before fleeing the scene, the two men took property from the home and struck Rivera with a gun.

Sheriff’s detectives are looking for suspect Larry Albert McDonald, a 28 year old white male who is considered to be armed and dangerous. At this time the case does not appear to be related to the unsolved invasion robbery and homicide that occurred in San Andreas last month.