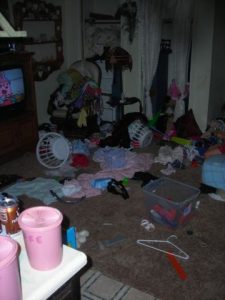 The Sonora Police Department says that 33-year-old Tamara Cline and 37-year-old Hubbard Wilson Jr. were arrested in the 300 block of Barretta Street, outside an apartment complex, because they were found to be under influence of a controlled substance. Officers later searched their residence and found methamphetamine, narcotics, a pipe with methamphetamine, and other narcotic paraphernalia.

Cline’s two children were in the residence, a 16 month old girl and three year old boy. Officers found the home to be cluttered and un-kept. There were live and unsecured electrical wires protruding from walls, and raw sewage seeping from under the rear of the residence.

The children were taken into protective custody and placed with Child Welfare Services. Cline and Wilson were booked into Tuolumne County Jail and face multiple charges.