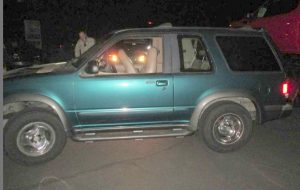 SUV where the drugs and other items were found

Jamestown, CA – A parked SUV with three occupants inside at a local car dealership raised the suspicions of a Tuolumne Sheriff’s Deputy who decided to stop and check out the situation.

The late hour, 11:30 p.m., and the fact that the older model Ford Explorer was parked in the Sierra Motors Dealership lot, located at the corner of 5th Avenue and Highway 108 in Jamestown, with its lights on caught the eye of the passing deputy. Behind the wheel was 44-year-old Eddie Daken of Ripon and two female passengers, 41-year-old Roxanne Putman of Arizona and 40-year-old Angelica Silva of Modesto, who initially gave the deputy a fake ID. That made the deputy even more suspicious, so he called in his partner.

K-9 Maverick took a sniff around the vehicle and detected that drugs were present. A subsequent search of the vehicle turned up nearly seven grams of methamphetamine, drug paraphernalia, drug packaging, and a digital scale. Several possible weapons were also uncovered including a pepper spray gun and several tasers.

The trio was arrested. Sgt. Benson advises, “The next step is to look at the names and see if these are actual people who have fallen victim to these suspects or if these cards were fake and created just to benefit them.”