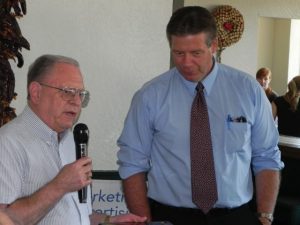 Sonora, CA — Sonora City Administrator Greg Applegate was honored by the Tuolumne Chamber of Commerce at its quarterly luncheon this afternoon.

The retiring Applegate was the keynote speaker, and reflected on his 20 plus year’s with the city. He praised the city council and staff for the pride they take in their jobs. He noted many accomplishments, including the transition of the Sonora Opera Hall and implementing the annual Christmas Parade.

Applegate said the biggest challenge of his time as City Administrator was the Lowe’s Home Improvement Center project, which took over seven years to get through the approval process. Applegate spoke to the Chamber of Commerce about concerns he has regarding increased environmental regulations, and their effect on development projects in the state. To view a portion of Applegate’s speech, click here.