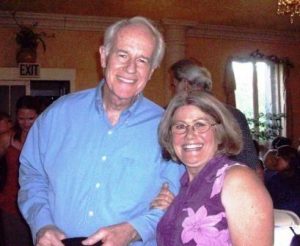 Mokelumne Hill, CA — Over the weekend, 110 people came out to meet a former star of the television show M*A*S*H.

Mike Farrell, who played B.J. Hunnicutt, was in Mokelumne Hill Saturday at an event hosted by the Calaveras County Democratic Central Committee. Farrell signed copies of his new book “Of Mule and Men,” and took questions from the audience. Also on hand was actress Shelly Fabrares, Farrell’s wife who has starred in shows like “Coach.” The event was held at the Hotel Leger.

Photo by Charity Maness of “thepinetree.net”