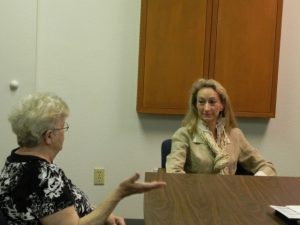 Bowen met with County Clerk and Auditor-Controller Debi Russell and her elections staff, as well as CAO Craig Pedro and District One Supervisor Liz Bass. Some discussion focused on the recently passed Proposition 14, which Bowen calls a “game changer” in the election process. California will be moving to an open primary system in 2012, and all 58 California counties will need to prepare for changes over the coming year.

On a different matter, Russell voiced concerns to Bowen about how state law does not allow vote-by-mail ballots received after Election Day to be tabulated in the overall count. It was noted that during last June’s primary there were hundreds of ballots in Tuolumne County that could not be counted because they arrived late. (Only a couple of votes separated the Sonora City Council race) Bowen stated she is very supportive of trying to find ways to make it easier for people to return vote-by-mail ballots, but doesn’t foresee any changes coming soon to state law.

Bowen also took a tour of the Election’s Office following the meeting with county staff.