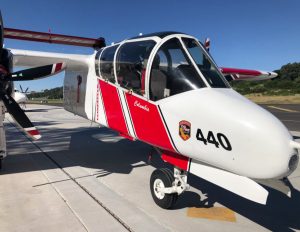 Update at 12:50 p.m.: Governor Gavin Newsom has issued that Capitol flags be flown at half-staff in honor of 49-year-old CAL Fire Captain Stacy Hamilton from Fresno County who died in an early morning collision in Merced County.

The Governor issued this statement, “On behalf of all Californians, Jennifer and I extend our condolences to Captain Stacy Hamilton’s family, friends and colleagues in this difficult time. It’s the work of brave firefighters like Stacy that keeps our communities safe and we are deeply grateful for his service.”

Capt. Hamilton  was a member of the Tuolumne -Calavaras Unit of CAL Fire and was currently assigned to the Columbia Air Attack Base as an Air Tactical Group Supervisor. Further details regarding him and the accident can be viewed below.

Original post at 12:15 p.m.: Sonora, CA – CAL Fire Tuolumne-Calaveras Unit and Columbia Air Attack Base are mourning the loss of one of their own after a deadly solo-vehicle crash in Merced County early this morning.

The death of 49-year-old CAL Fire Captain Stacy Hamilton from the Shaver Lake area of Fresno County was announced on the units Twitter page this morning, which read:

“We are saddened to report the passing of Fire Captain Stacy Hamilton. Captain Hamilton was assigned to the Columbia Air Attack Base and was an extremely talented Air Tactical Group Supervisor, a great friend, mentor, and person.”

The CHP reports that the accident happened around 2:20 a.m. on Saturday. Capt. Hamilton was reportedly driving a 2004 Subaru Outback on Snelling Road, near La Paloma Road, north of Merced when the car went off the roadway on the west shoulder about 20 feet and overturned. Drugs or alcohol are not believed to be a factor in the crash, according to the CHP, which is still investigating a cause for the wreck.

Capt. Hamilton joined CAL Fire in 2006, after working for the United States Forest Service. A member of the Tuolumne-Calaveras Unit, he was assigned to the Sierra Training Center, Forestry Training Program where he trained inmates. After four years at that post, he transferred to the Columbia Helitack Program and in 2013 moved to the fixed wing aircraft at the Columbia Air Attack Base as an Air Tactical Group Supervisor (ATGS). His AA440 aircraft is shown in the image box. CAL Fire’s Facebook pafe noted that Capt. Hamilton was a “skilled and professional” ATGS.

Capt. Hamilton is survived by his wife and two teenage sons. The post also asks the public, “Please join us in keeping Stacy and his loved ones, as well as his co-workers in your thoughts as we grieve his loss and honor his memory.”