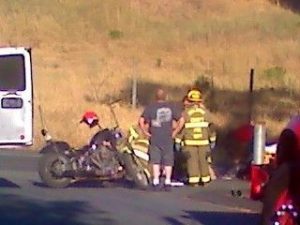 The CHP says 26-year-old Jordan R. Porter of Twain Harte was riding along Bergel Road and turned onto Phoenix Lake Road. The motorcycle was struck by an oncoming sedan. Porter suffered a broken leg and was transported to Doctor’s Hospital in Modesto via medi-flight. The accident occurred at 6:10pm.