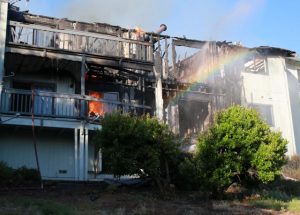 Update at 8:30 p.m.: CAL Fire reports that the fire at the Villa Drive Condo Complex has been knocked down. Four units in the building were involved in the fire and there is no damage estimate as of yet. Crews will remain on the scene mopping up for several hours. What ignited the fire remains under investigation. Further details on the blaze and evacuations that took place are below.

A special thank you to our community news partners Don Smith and James Reese for sending in pictures and video.

Update at 7:15 p.m.: CAL Fire reports that four condo are involved in the blaze at the Villa Drive Condo Complex in Gibbs Estates in Sonora. They relay that crews are making progress and checking for further extensions into the building. Additional information regarding evacuations are below.

Update at 6:45 p.m.: CAL Fire reports that the flames have spread into several connected condos and several residents have been evacuated. The Red Cross has been called into help those who have been displaced. CAL Fire also relays that crews are having difficulty with the water supply and a representative from Tuolumne Utilities District has been called to the scene.

The flames broke out in the room of condo unit 108 in the Villa Drive Condo Complex in the Gibbs Ranch Estates in Sonora around 5:30 p.m. Cal Fire details an occupant of that room was able to escape unharmed. Further details on the fire can be viewed below.

Update at 6 p.m.: CAL Fire reports when crews arrived on the scene  in the 19800 block of Villa Drive in the Gibbs Ranch Estates a room in a condo was fully engulfed in flames and one person inside was able to escape without injury.

Original post at 5:45 p.m.: Sonora, CA — CAL Fire crews are heading to a report of a multi-family structure fire in the Sonora area.

It is located in the 19800 block of Villa Drive, off of Gibbs Drive where several condos and single family homes are located. There is no word on whether any other structures are threatened or if the flames have spread it vegetation. We will bring you further details as soon as they become available.