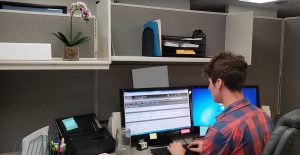 Calaveras County Human Resources Analyst Deborah Schoeman, who coordinates the program says, “These internships open up career pathways into public sector work and help increase the understanding of services the county provides to the community.” The Office of Education notes that the current County Clerk Recorder, Rebecca Turner, was hired after completing her internship in the Clerk-Recorder’s office in 2004, which was the last year the internships were offered, until now.

The office of education shared the stories of this year’s five students involved in the internship program. Student interns are working in the Clerk-Recorder’s office, the District Attorney’s office, the Library, the Victim Witness office, and the Public Works office. Students spend up to four hours, two to three times each week at their internships, depending on their individual school schedules and the needs of the county government office.

Calaveras High School senior Jared Bisbikis chose an internship with the Clerk-Recorder’s office because of his love for politics and elections. In August 2018, Bisbikis volunteered with the group Democracy in Action to advocate for mid-term election student involvement. Bisbikis calls the experience invaluable and says, “I have learned a lot about the elections office and have been exposed to many processes and functions of this office.” Bisbikis has been accepted to the University of San Francisco and will be applying to work at the clerk’s office on campus while pursuing majors in both international studies and French.

Jacob Young, also a Calaveras High School senior, chose an internship in the District Attorney’s office. He says, “The staff here is really awesome; each case is different and I like all the different jobs they have me doing.” Young has limited access to information in the office as a student; however, he is scheduled to receive “CLETS” (California Law Enforcement Telecommunications System) training in order to get classified clearance. Young will be attending the University of California at Santa Barbara as a history major, where he may also study pre-law.

Syerra Smyth selected the Victim Services internship because she loves the work they do and how they help people. “I wanted to be a part of the relief and support that is brought to people who are suffering,” Smyth stated. “I have learned a lot about the court system, the programs offered and how much they take care of everyone and what it takes to help them.” Smyth plans to attend Delta college pursuing general education, working at Starbucks and helping the Calaveras Cheer team.

Andrew Hutt chose the Public Works internship, and says, “I have learned about the complexity of how the county approves certain projects, such as the renovation to a parking lot.” He notes, “I have also learned how to read parcel maps and I also value the experience of working in an office environment and feeling valued at this internship.” Hutt plans to attend a 4-year University and purse a degree in either Computer Science or Mechanical Engineering following graduation. Business Administrator for the Department of Public Works, Mark Ksenzulak, feels the internship program has been successful so far. “Andrew has tackled some time consuming projects, which has been very helpful.”

The program is a component of the new Career Technical Education project of the Calaveras Workforce Development Initiative. To learn more about the program, contact a Calaveras high school career center.