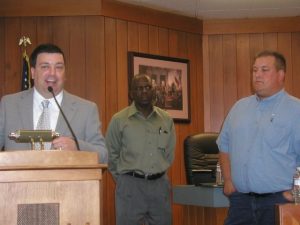 Sonora, CA — Sierra Pacific Industries will retool its Standard Mill and plans to re-open it in May 2011.

The announcement was made Tuesday morning during a press conference hosted by Economic Development Authority Director Larry Cope at the Tuolumne County Government Center.

Remodeling of the plant will begin in July.

S.P.I. will install new technology to produce lumber from a wider array of log sizes than is possible under the current configuration.

"We are investing in the future of this community," says Ryan Land, SPI area manager. "Lumber markets have improved modestly and by increasing the range of acceptable log sizes we will be able to bring family-wage jobs back to the area."

According to company Spokesperson Mark Luster, once the plant is retooled, approximately 130 employees will be hired. He says the changes at Standard will not affect the operations at the Chinese Camp Mill and its 80 employees.

The Standard Mill closed in July of 2009 due to a weak lumber market. At the time, around 130 employees lost their jobs.