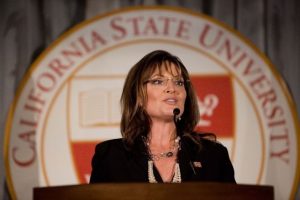 Perhaps Sarah Palin has never been closer to the Motherlode, than she was on Friday night.

The former Governor of Alaska and 2008 Republican vice-presidential candidate, spoke at the 50th anniversary celebration of CSU Stanislaus in Turlock.

Sarah Palin criticized California Attorney General Jerry Brown over his investigation into her speaking arrangement at the gala dinner at the cash-strapped California university.

According to the Associated Press, her visit set off a pitched legal feud. Brown launched an investigation into the finances of the university’s foundation arm amid allegations that the nonprofit violated public disclosure laws.

"Jerry Brown and friends, come on this is California," she said. "Do you not have anything else to do?"

More than 360 donors paid $500 per ticket to attend the black-tie fundraiser in the school’s cafeteria.

Friday’s sold-out dinner was expected to bring in more than $200,000, making the gala the most successful fundraiser in the university’s history, said university foundation board president Matt Swanson.

"We’re not here to make a political statement, we’re here to make money," said Swanson. "This event has surpassed all of our expectations."

University spokeswoman Eve Hightower said that the funds will help pay for a variety of pressing campus needs, which the foundation will determine after consulting with university officials.

During the main dinner, the university treated the press corp to pizza, soda and bottled water, in a seperate room, before allowing them back in the cafeteria during Palin’s speech.

The media was not allowed access to Palin, however, Republican Senator Jeff Denham spoke to the press after the event. Denham’s comments were filled with praise for the Governor’s speech and he said that he is optimistic for the future of conservatives and the Republican Party.