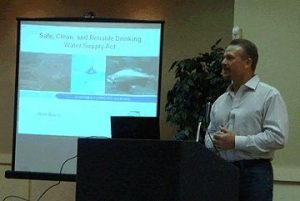 Folsom, CA — The proposed $11.2 billion water bond was the focus of a recent meeting hosted by the Tuolumne Utilities District.

T.U.D. hosted water leaders from the Mountain Counties Water Resources Association in Folsom late last week. General Manager Pete Kampa says it was held in the Sacramento area in hopes of attracting a wider variety of people that might not have been able to make a trip to Tuolumne County. Around 80 were on hand to hear a panel experts speak on the plan.

Kampa says the T.U.D. Board of Directors has not taken a stance on whether it will support the bond measure, but says that he personally is favorable of the overall package.

Kampa says the meeting featured good discussion about the pros and cons of the measure that will go before voters in November.