Doolittle Will Not Face Charges 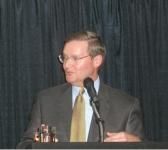 Washington, DC – The Department of Justice will not press charges against a former Mother Lode Congressman that reportedly had ties to lobbyist Jack Abramoff.

The Associated Press reports that John Doolittle was notified by the Justice Department that he will not be charged with any wrongdoing related to involvement with Abramoff.
Doolittle’s home was raided by the DOJ back in 2007 as part of an investigation.

The A.P. also says that Abramoff was released to a halfway house this week after serving four years in prison on fraud, corruption and conspiracy charges.