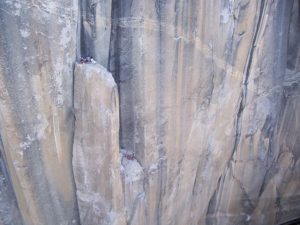 The unidentified 48-year-old male from France was climbing El Capitan Thursday when he fell approximately 65 ft. and sustained head and chest injuries. A second party climbing the route was able to provide basic emergency medical assistance until Park Rangers could arrive.

The climber, and his partner were on a popular climbing route on El Capitan called the Salathe Wall. Park officials say this is one of the most famous and popular technical rock climbs in the world. In its entirety, the climbing route spans 3,500 feet in length. The accidental fall occurred on a prominent feature of the route known as the El Cap Spire, at approximately 1,600 feet above Yosemite Valley.

A California Highway Patrol helicopter assisted in hoisting the climber off the route. He was then airlifted to Doctors Medical Center in Modesto.