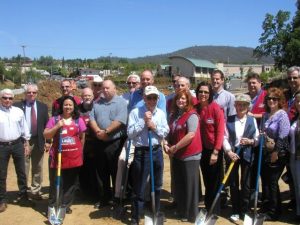 Sonora, CA – Local dignitaries and officials from Lowe’s were on hand to officially break ground on the new home improvement center being built in Sonora.

“The site work is underway, and sometime in June we’ll probably start work on the building,” says Ed Burris, Lowe’s District Manager. “When you see walls starting to go up, then you can figure that we’re about 24 to 25 weeks from opening.”

If everything stays on schedule, the opening could occur in December, with hiring starting around October.

Sonora based California Gold Development Corporation has been overseeing the development of the project.

“It’s been seven years since we first sat down in Stockton and began to negotiate a project on this site,” says Ron Woodall, California Gold CEO. “It is a great day, and it is great to see everyone out here.”

Members of the City Council, Sanguinetti family, California Gold, Lowe’s, city staff and many others were on hand for the groundbreaking ceremony at the site on Old Wards Ferry Road.