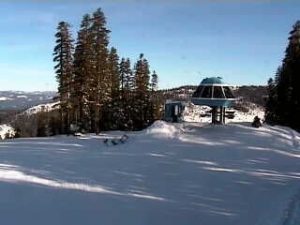 As the snow ski season begins to wind down, Dodge Ridge employees are pleased with the amount of skiers they saw this year, despite a down economy.

Dodge Ridge has received over a foot of new snow, just in the past two days, which added to the already high totals since opening in December.

Jenquin said that the total number of skiers this year remains on par with the number from 2008-2009, with an increase in the amount of children’s lessons. Jenquin attributes that to the new family lodge and a bit of retooling in this year’s children’s programs by using both new interpretative methods and animal characters.

As Marketing Manager, Jenquin tries to show the value of skiing at Dodge Ridge by scheduling activities for the entire family. This weekend for example, will include the annual “pond skimming” event (where skiers try to make ski across a large body of water, without falling in), a chili cook-off and then on Sunday, a Golden Easter Egg Hunt.

Also by teaming with Tuolumne County Transit for a second year in a row, and offering $10 roundtrip rides, the number of local skiers continued to remain high.

Dodge Ridge has not yet announced an official closing date this year, although continuing the operation past April is typically rare.